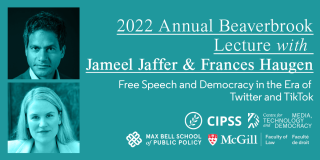 The Supreme Court of the United States is set to consider the two cases involving Florida and Texas’s social media laws, signalling a hugely significant court battle in the United States about the questions of free speech and social media regulation. This court battle comes at a moment when democracies around the world grapple with similar issues.

The 2022 Beaverbrook Annual Lecture will consider the US case and address broader questions surrounding free speech and social media regulation. Such questions include: why do we protect free speech? Is free speech still worth protecting? Why is free speech online more complex than free speech offline? What kinds of regulations should we oppose in this space and which should we welcome?

Register for this event.

Jameel Jaffer directs the Knight First Amendment Institute at Columbia University, which defends the freedoms of speech and the press in the digital age through strategic litigation, research, and public education. Under Jaffer’s leadership, the Institute has filed precedent-setting litigation, undertaken major interdisciplinary research initiatives, and become an influential voice in debates about the freedoms of speech and the press in the digital age. Jaffer previously served as deputy legal director at the American Civil Liberties Union, where he oversaw the organization’s work on free speech, privacy, technology, national security, and international human rights. Over the course of his fourteen years at the ACLU, he argued civil liberties cases in multiple appeals courts as well as the U.S. Supreme Court and testified many times before U.S. federal agencies and the U.S. Congress. Jaffer’s recent writing has appeared in the New York Times, the New Yorker, Foreign Affairs, and the Yale Law Journal Forum. He is an executive editor of Just Security, a national security blog, and his most recent book, The Drone Memos, was one of the Guardian’s “Best Books of 2016.” He is a graduate of Williams College, Cambridge University, and Harvard Law School. Early in his legal career, he served as a law clerk to Hon. Amalya L. Kearse of the U.S. Court of Appeals for the Second Circuit, and then to Rt. Hon. Beverley McLachlin, Chief Justice of Canada. He currently serves on the board of the Pierre Elliott Trudeau Foundation, on the advisory board for First Look Media’s Press Freedom Litigation Fund, and on the advisory board for the Center for Democracy and Technology.

Frances Haugen is an advocate for accountability & transparency in social media. Born in Iowa City, Iowa, Frances is the daughter of two professors and grew up attending the Iowa caucuses with her parents, instilling a strong sense of pride in democracy and responsibility for civic participation. Frances holds a degree in Electrical and Computer Engineering from Olin College and a MBA from Harvard University. She is a specialist in algorithmic product management, having worked on ranking algorithms at Google, Pinterest, Yelp and Facebook. In 2019, she was recruited to Facebook to be the lead Product Manager on the Civic Misinformation team, which dealt with issues related to democracy and misinformation, and later also worked on counter-espionage. During her time at Facebook, Frances became increasingly alarmed by the choices the company makes prioritizing their own profits over public safety and putting people's lives at risk. As a last resort and at great personal risk, Frances made the courageous decision to blow the whistle on Facebook. The initial reporting was done by the Wall Street Journal in what became known as “The Facebook Files”. Since going public, Frances has testified in front of the US Congress, UK and EU Parliaments, the French Senate and National Assembly, and has engaged with lawmakers internationally on how to best address the negative externalities of social media platforms. Frances has filed a series of complaints with the US Federal Government relating to Facebook (now named ‘Meta’) claiming that the company has been misleading the public and investors on how it handles issues such as climate change, misinformation, and hate speech, and the impact of its services on the mental health of children and young adults. Frances fundamentally believes that the problems we are facing today with social media are solvable, and is dedicated to uniting people around the world to bring about change. We can have social media that brings out the best in humanity.