Internationally renowned Quebec scientist to take helm of The Neuro 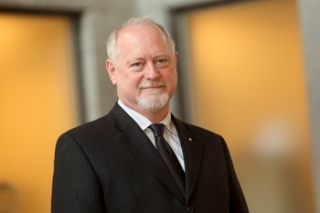 November 8 2012 - After a worldwide search, the renowned Montreal Neurological Institute and Hospital – The Neuro – of McGill University and the McGill University Health Centre has a new director, Guy Rouleau, MD, PhD, FRCPC, OQ.  Dr. Rouleau, a prominent Quebec clinician-scientist recognized for his contributions to science and society, will also hold the Wilder Penfield Chair in Neuroscience as Professor of Neurology and Neurosurgery at McGill. The appointment takes effect January 1, 2013.

“The Neuro is a tremendous asset to Quebec that contributes directly to the advancement of science and health on a regional and international scale,” said Prof. Heather Munroe-Blum, Principal and Vice-Chancellor of McGill. “It plays a pivotal role in expanding our basic knowledge of the neurosciences, and applying this knowledge to the diagnosis and treatment of neurological disease and the improvement of countless lives in this province and beyond. With the appointment of Dr. Rouleau, we look forward with great confidence to building on the Neuro’s global reputation.”

“As Neuro Director and Wilder Penfield Professor of Neuroscience, Dr. Rouleau will have endless opportunities in which to invest his passion for neuroscience, his creativity and his leadership,” said Normand Rinfret, Director General and Chief Executive Officer of the McGill University Health Centre. “As the talented professionals at The Neuro continue to map and share their understanding of the brain, as well as provide exceptional care and training, we will also be charting a bright future at the Glen site that will support even more collaboration and benefits for society.”

Dr. Rouleau comes to The Neuro from the Université de Montréal, where in addition to his own research laboratory, he currently directs the CHU Ste-Justine Research Centre, the Centre of Excellence in Neuroscience  of the Université de Montréal (CENUM) and the Réseau de médecine génétique appliquée du Québec - FRQS. He is a recipient of many honours, including most recently the 2012 Prix du Québec – Prix Wilder Penfield, the Henry Friesen Prize and the Margolese Prize. He is also an Officer of the Ordre national du Québec.

“I have dedicated my career to advancing neuroscience and neurological care,” said Dr. Rouleau. “To increase the impact of this work in Quebec and beyond, The Neuro is the place to be. Staying true to Dr. Penfield’s vision, scientists and physicians work hand in hand so that problems encountered in the clinic inspire research, and new findings from the labs are directly applied to patients’ medical needs. The Neuro is a world leader in its integration of research, patient care and teaching. “

Dr. Rouleau’s landmark achievements are his contributions to the identification of over 20 disease-causing genes and his discovery of new mutational mechanisms. Over the last 20 years, Dr. Rouleau and his team have focused on identifying genes causing neurological and psychiatric diseases, including autism, amyotrophic lateral sclerosis, hereditary neuropathies, epilepsy and schizophrenia, as well as providing a better understanding of the molecular mechanisms that lead to these disease symptoms.

“Dr. Rouleau is a pioneer in both research and clinical care in this field and committed to training the next generation of neuroscientists,” said David Eidelman, Vice-Principal of Health Affairs and Dean of Medicine at McGill. “He will be instrumental in reinforcing ties and creating new ones with academic institutions, hospitals and communities across Quebec, Canada and internationally. We are delighted to welcome him back to McGill.”

“The Neuro is a world-renowned hub of innovation known for taking calculated risks vital for advancing neuroscience and for solving some of the world’s most pressing neurological problems,” said Mr. Jacques Bougie, Chairman of The Neuro’s Advisory Board. “It requires a visionary leader and Dr. Rouleau is just the person for the job.”

Founded in 1934, The Neuro’s mission is to conduct cutting-edge neuroscience research and to provide the highest levels of advanced and compassionate care for patients with neurological conditions. Diseases of the nervous system account for more hospitalizations, long-term care and chronic suffering than nearly all other medical conditions combined. As we live longer, half of the Canadians alive today will eventually experience a neurological disease within their own families, making the pioneering work at The Neuro more critical than ever.