Eat, Drink and Be Merry! 67 years of a delicious holiday tradition 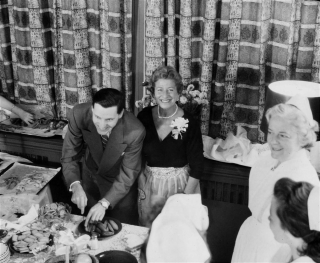 In 1947 Ruth Reitman had a difficult surgery at the Montreal Neurological Institute and Hospital – The Neuro, at McGill University and the McGill University Health Centre. Grateful and impressed by the treatment and care she received, Mrs. Reitman arranged a Christmas party for neurosurgeon Dr. William Cone, his residents and nursing staff. This small gathering quickly grew into the annual Reitman luncheon.

Now in its 67th year, the tradition continues to be cherished and celebrated at The Neuro, alongside four generations of the Reitman family. More than 1,200 Neuro staff are treated to this holiday meal every December, served over three shifts by a team of volunteers and Reitman family members.

“The Neuro is a world-leader in both neuroscience and neurological patient care and our family is proud to be associated with it,” says Joel Reitman, President, Jillcy Investments Ltd. This year’s special guest, a friend of the Reitman family, is Justin Trudeau, Leader of the Liberal Party of Canada.

Guy Rouleau, Director of the Montreal Neurological Institute and Hospital

Justin Trudeau, Leader of the Liberal Party of Canada