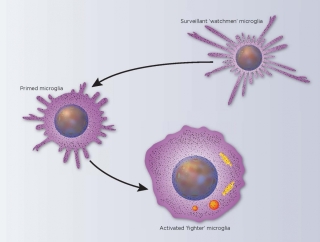 In many pathologies of the nervous system, there is a common event - cells called microglia are activated from surveillant watchmen into fighters.  Microglia are the immune cells of the nervous system, ingesting and destroying pathogens and damaged nerve cells. Until now little was known about the molecular mechanisms of microglia activation despite this being a critical process in the body. Now new research from the Montreal Neurological Institute and Hospital – The Neuro - at McGill University provides the first evidence that mechanisms regulated by the Runx1 gene control the balance between the surveillant versus activated microglia states. The finding, published in the Journal of Neuroscience, has significant implications for understanding and treating neurological conditions.

As surveillant watchmen, microglial cells wait for something bad to happen in the nervous system. They have a small cell body and long branches that monitor the local environment. As soon as there are signs of injury or disease, microglia are activated into fighters. The branches retract and the microglia morph into a large rounded body in order to attack and ingest pathogens: bacteria, viruses, and diseased or injured nerve cells (for example in head trauma). If microglia activation is not precisely controlled, however, it can become harmful to the body as microglia can start to attack healthy cells. For example, after epileptic seizures, the brain responds by regenerating new nerve cells. The microglia help in this process of regeneration, but they can also negatively influence the survival of the new born nerve cells if their activation persists for too long. The research team at The Neuro therefore asked important questions: How can we learn how the process of activating microglia from watchmen to fighter is controlled?  What can we do to ensure that the beneficial effects of microglia activation predominate over their potentially deleterious effects?

It turns out that the process of microglia activation in the adult brain is almost a recapitulation in reverse of mechanisms that occur during nervous system development. Microglia in the developing brain are already in an early form of fighter mode and have the capacity to eliminate cell debris and redundant nerve cell connections. Pruning of the nerve cell network is a normal process during development. Soon after birth microglia are gradually deactivated from early fighters to surveillant watchmen, a state that they will maintain until there is injury or trauma in the adult brain, which causes them to revert from watchmen back to fighters.  “So the approach we took was to study the normal process of microglia deactivation during brain development on the premise that understanding this process might also help us understand adult brain microglia activation in response to injury or disease,” says Dr. Stefano Stifani, lead investigator and neuroscientist at The Neuro. “Our study provides evidence for a previously unrecognized role of a particular gene, termed Runx1, in promoting the transition of microglia from an early form of activated fighter to surveillant watchmen in the postnatal mouse brain. We show that Runx1 is expressed in these early fighter microglia during the first two postnatal weeks and that if Runx1 function in these cells is inhibited they tend to persist longer and their transition into watchmen microglia is delayed. We also looked at an experimental animal model in which an artificial injury causes surveillant microglia to be activated into fighters. This showed that Runx1 expression is induced in microglia when they become activated following injury in the adult mouse nervous system, suggesting that Runx1 might be important for controlling how long fighter microglia remain activated in the adult nervous system, as it does in the developing brain.”

These findings improve our understanding of microglia biology in the developing and injured adult brain. Moreover, they have potential therapeutic implications for several neurological conditions - further research could lead to the development of treatment strategies by pharmacologically targeting key modulators of microglia activation.

The Neuro
The Montreal Neurological Institute and Hospital — the Neuro, is a unique academic medical centre dedicated to neuroscience. Founded in 1934 by the renowned Dr. Wilder Penfield, the Neuro is recognized internationally for integrating research, compassionate patient care and advanced training, all key to advances in science and medicine. The Neuro is a research and teaching institute of McGill University and forms the basis for the Neuroscience Mission of the McGill University Health Centre.  Neuro researchers are world leaders in cellular and molecular neuroscience, brain imaging, cognitive neuroscience and the study and treatment of epilepsy, multiple sclerosis and neuromuscular disorders. For more information, visit theneuro.com.