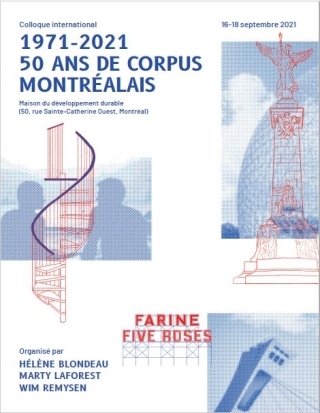 CIRM is proud to contribute as a partner to the international conference 1971-2021: 50 ans de corpus montréalais. This event organized by Hélène Blondeau (U. of Florida), Marty Laforest (UQTR), and Wim Remysen (CIRM / U. de Sherbrooke) marks the 50th anniversary of the French-language corpus Montréal 1971, which has left its mark on modern sociolinguistics. Guests of honour include sociolinguists Henrietta Cedergren, Gillian Sankoff, Pierrette Thibault, and Diane Vincent, as well as mathematician and linguist David Sankoff.

It consists of a corpus of Montreal spoken French created at the Université de Montréal by Gillian Sankoff, Henrietta Cedergren, and David Sankoff. This work which launched Quebec and Canadian sociolinguistics aimed to obtain data on the nature, extent, and function of linguistic diversity within spoken French in Montreal; to shed light on the situation of a linguistically alienated population and to contribute to a better understanding of Quebec French. A remarkable aspect of this corpus is its use of new quantitative analysis methods (regression models) and research questions that have inspired other studies on the variation of French in Quebec, notably thanks to the mathematical and computational contributions of David Sankoff. Constituting a representative sample of Montreal-born Francophones aged 15 and over, the corpus takes a variationist approach. Its introduction of a new social variable based on the relationship to the standard language (“participation in the language market”) constitutes an important theoretical contribution to sociolinguistics. In 1984, Pierrette Thibault and Diane Vincent re-collected data from half of the 1971 corpus’ participants, and in 1995, Diane Vincent, Marty Laforest, and Guylaine Martel were able to recall 14 participants from the first studies. The latter work made it possible to conduct comparative studies of language change from a longitudinal perspective.

In addition to marking the anniversary of the corpus, this conference is intended to pay tribute to Quebec’s sociolinguistic pioneers and to bring together researchers concerned about the diversity of the French languge and the use of oral language corpuses.

The event’s organizing committee is looking for paper proposals that relate to one or another of the following three thematic axes: