Walking Tour | Exploring the Champ des Possibles and its Milieu 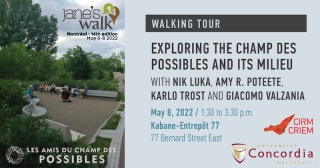 As part of the 14th edition of the Montréal Urban Ecology Centre’s Jane’s Walk, the Centre for Interdisciplinary Research on Montréal (CIRM) will host a walking tour around the Champ des Possibles, in the Plateau-Mont-Royal borough.

The activity will invite participants to think about the opportunities and challenges associated with emergent ecologies and post-industrial sites in city neighbourhoods. We’ll consider why multiple communities express a preference for maintaining the Champ as a “wild” green space, with broad support for prioritizing its recreational, environmental, and artistic potential. We’ll discuss how diverse uses, interests, debates, and aspirations play out in (and through) the Champ. Who cares for this place? The tour leaders will comment on how this Montréal landscape is contributing to bigger conversations about urban commoning, landscape studies, and urban design, and how to accommodate diverse or even competing interests that reveal themselves in other post-industrial (sub)urban sites.

About the Champ des Possibles

The Champ des Possibles is an urban prairie that has emerged over several decades on an abandoned rail yard in Montréal’s Mile End neighbourhood. This well-loved public landscape is currently in a state of transition, with mandatory site decontamination expected to begin in the next year or so. Since 2010, it has been cared for by Les Amis du Champ des Possibles, an organization with three principal aims: to make the Champ a permanent public green space and urban biodiversity reserve; to promote and to encourage public education on natural science, history, and art; to promote the creation of new urban green spaces and biodiversity corridors. The Champ exemplifies how residents around the world reclaim abandoned spaces of production and transshipment in more-or-less collective ways, refashioning them to reflect their own contemporary needs and values.