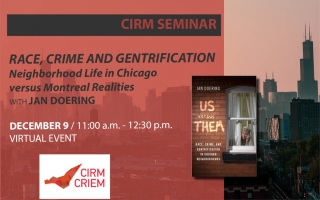 Anti-crime initiatives in low-income neighborhoods often lead to increased policing and evictions of tenants. Such a situation contributes to gentrification and the displacement of less fortunate and racialized communities to other neighborhoods. In response to this issue, many city dwellers in both Chicago and Montreal are taking steps to advocate for affordable housing and equal access to public space.

This seminar will address the complex interplay between anti-crime initiatives, gentrification, and social justice activism in a Chicago-Montreal comparative perspective. How do crime and gentrification polarize racially diverse neighborhoods? What are the repercussions at the political level? How do city dwellers position themselves in those conflicts?

Based on the book “Us versus Them: Race, Crime, and Gentrification in Chicago” by Jan Doering (Oxford UP, 2020), this seminar will bring together a panel of researchers in urban studies and race relations to collectively reflect on gentrifying neighbourhoods.

Where: Espace Montréal via Zoom

The event will be held in French and in English; questions in both languages are welcome. Registration is required to access the login link.

Crime and gentrification are hot button issues that easily polarize racially diverse neighborhoods. How do residents, activists, and politicians navigate the thorny politics of race as they fight crime or resist gentrification? And do conflicts over competing visions of neighborhood change necessarily divide activists into racially homogeneous camps, or can they produce more complex alliances and divisions? In Us versus Them, Jan Doering answers these questions through an in-depth study of two Chicago neighborhoods. Drawing on three and a half years of ethnographic fieldwork, Doering examines how activists and community leaders clashed and collaborated as they launched new initiatives, built coalitions, appeased critics, and discredited opponents. At the heart of these political maneuvers, he uncovers a ceaseless battle over racial meanings that unfolded as residents strove to make local initiatives and urban change appear racially benign or malignant. A thoughtful and clear-eyed contribution to the field, Us versus Them reveals the deep impact that competing racial meanings have on the fabric of community and the direction of neighborhood change.