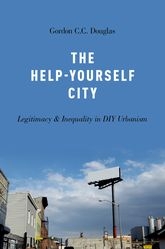 In The Help-Yourself City, Gordon Douglas looks closely at people who take urban planning into their own hands with homemade signs and benches, guerrilla bike lanes and more. Douglas explores the frustration, creativity, and technical expertise behind these interventions, but also the position of privilege from which they often come. Presenting a needed analysis of this growing trend from vacant lots to city planning offices, The Help-Yourself City tells a street-level story of people’s relationships to their urban surroundings and a troubling individualization of participatory democracy.

On October 30th (6 p.m. to 7:30 p.m.), the McGill School of Urban Planning, in collaboration with CIRM, invite you to the first of two conferences by Gordon Douglas, Assistant Professor of Urban Planning and Director of the Institute for Metropolitan Studies at San José State University. A multidisciplinary urbanist with a background in sociology and cultural studies, Gordon's writing and photography have appeared in Urban Studies, the Journal of Urban Design, City & Community, and other journals, as well as a number of books, magazines, newspapers, and blogs. He received his PhD in Sociology at the University of Chicago in 2014.