Professor
Department of Neurology and Neurosurgery 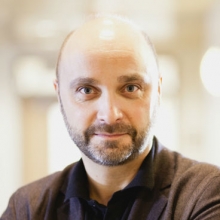 Overall scientific output – Prof Baillet’s track record is in leading multidisciplinary projects in systems and clinical neuroscience. In particular, he contributed a wide spectrum of advances in brain imaging methods, with specific expertise in multidimensional biological time-series analyses and image processing, biophysical electromagnetics, computational neuroanatomy, and statistical methods. Dr. Baillet has been playing a pivotal role in the development of magnetoencephalography (MEG) as a time-resolved brain imaging modality for systems and clinical neuroscience research. He contributed authoritative reviews of the field, including a recent special focus for Nature Neuroscience, and highly-cited good-practice guidelines.

Promotion and Practice of Open Science – Dr. Baillet contributed major open-science resources, which he considers as vectors of research productivity and reproducibility. He led in 2014/15 a Quebec Bioimaging Network strategic initiative to create the Open MEG Archives (OMEGA): the first open-access repository of MEG data (>250 data entries and 510 international users). He also share his tools and methods via open-source software. His team hosts the software integration of Brainstorm, an international NIH project, which has grown a community of >16,500 registered users. Since 2011, 1,200 students and faculty members have attended our 32 training workshops worldwide, and 650 journal articles cite Brainstorm as the primary tool for data analysis.

Management of Large Research Operations – Dr. Baillet founded and led major research and clinical imaging platforms: the MEG program he created in the USA in 2008 was recognized by US health-insurance partners, and is now part of the routine pre-surgical workup of dozens of epilepsy and brain-tumor patients annually. The MEG core he founded at McGill in 2012 has become the second busiest scanner on campus, after 3T MRI. He has led the McConnell Brain Imaging Centre, the largest of its kind in Canada in 2013-17. In that period, he was also the inaugural leader of the Neuroimaging & Neuroinformatics research group at The Neuro.

Industrial Transfers – Dr. Baillet has experience with the management of patented intellectual property and successful industrial transfers. For example, his patented MRI work for acute stroke evaluation was transferred to the biomedical industry, used in national clinical trials, obtained CE and FDA certifications, and is now marketed worldwide.