In the age of “America First,” it’s easy to remember July 4 as the day we Americans resolved to go it alone. As Thomas Jefferson proclaimed in the Declaration of Independence, the people of the 13 colonies had “totally dissolved” their ties to the British Empire and could henceforth do whatever “Independent States may of right do.”

[Op-ed] - J.M. Opal, Chair of the Department of History and Classical Studies

Professor Graham Fraser appointed Officer of the Order of Canada

Professor Graham Fraser is one of 83 Canadians appointed to the Order of Canada. Considered one of the country’s highest honours, it goes to those who have shaped society, innovated in interesting ways or made an impact on their community.

Africa’s population is projected to nearly quadruple over the next century1. And that is following a staggering increase over just seven decades — from 200 million people in 1950 to 1.25 billion in 20182. Meanwhile, temperatures across the continent are expected to rise by between 3 °C and 4 °C over the next century, bringing more drought, flooding, conflict and species loss3.

This article was co-authored by Professor Colin Chapman, Anthropology.

An Obligation to Produce Results

An article by Thomas Mulcair based on the Mallory Lecture he gave at the McGill Institute for the Study of Canada earlier this spring.

Every summer growing up, Fiona Beaty's family would make the trip from Vancouver to Bowen Island, where she would spend her time playing in the woods and turning over rocks at the shore in her search for crabs. Now, Beaty is back on the coast and her more recent explorations in marine biology are getting much more attention. Last month, she was awarded a National Geographic Early Career grant to support her latest project, the Howe Sound Atl'ka7tsem Marine Reference Guide. 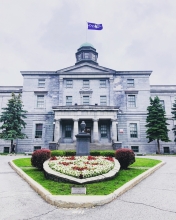 Faculty of Arts receives US$ 1.25-million grant from The Andrew W. Mellon Foundation

The Mellon grant will support a new Indigenous Studies and Community Engagement Initiative, to be based in the Faculty of Arts

The Andrew W. Mellon Foundation has awarded a US$1.25-million grant to McGill University, in support of a new Indigenous Studies and Community Engagement Initiative. The Initiative will be implemented over the next five years.

MAY 16, 2019 | As Alabama criminalizes abortions, a number of Canadian politicians have been loudly expressing support for anti-abortion groups and their agendas but some political scientists say women’s reproductive rights are well-protected here. Stephanie Paterson, an associate professor of political science at Concordia University, says there will always be anti-abortion politicians spouting off but she believes women’s rights are enshrined in the Charter of Rights.

MAY 13, 2019 | Last week, parliamentary hearings began on Quebec’s Bill 21, which would ban public employees in “positions of authority” from wearing religious symbols. In his testimony, the philosopher Charles Taylor stated that he and Gérard Bouchard were wrong to propose restrictions on religious symbols in their 2008 report on reasonable accommodation.

MAY 12, 2019 | Politicians are increasingly concerned that social media giants have become so big, powerful and rich that they are effectively above the law -- at least in a small country like Canada.

MAY 7, 2019 | We know that the prevalence of autism has risen steadily in Quebec, and across the world, as awareness and identification have improved, as have concerns about the availability of both diagnostic and intervention services. Autism is here to stay. Over the past two decades, consecutive governments have struggled to find a policy response to this condition — better understood as a spectrum — that defies typical policy definitions.

Why developing Ontario's Far North is risky business | The Star

MAY 27, 2019 | Sam Hunter set out to go camping near his home on Weenusk First Nation, about 35 kilometres south of Hudson Bay in Ontario’s Far North. After spending a night in the bush, Hunter, who has lived on this land for most of his 53 years, went to look for dry wood. As he drove across what appeared to be a frozen river, the surface suddenly gave way and his Yamaha Bravo snowmobile plunged through the ice.

JUNE 5, 2019 | For the first time in the history of Quebec, the provincial government has no senior ministers and only two elected representatives from the island of Montreal, and it shows. Nothing makes this more evident than Bill 21, the secularism law proposed by the Coalition Avenir Québec (CAQ) government that is especially contentious for banning certain public workers from wearing religious symbols. 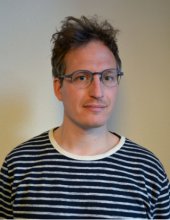 The John G. Diefenbaker Award allows a distinguished German scholar in the social sciences or humanities to conduct research in Canada, and spend brief periods gaining further experience at American institutions. The award is designed to encourage exchange between the university communities of Canada and Germany.

The Human Resources Office in the Faculty of Arts is pleased to announce the latest updates to Administrative and Support Staff positions within the Faculty. Join us in wishing your colleagues well in their new roles.

JUNE 2, 2019 | Arash Abizadeh’s monograph, “Hobbes and the Two Faces of Ethics,” has been awarded the 2019 Canadian Philosophical Association Biennial Book Prize (English). The jury writes that “This is an outstanding book, one of the best books on early modern philosophy in the past 10 years.