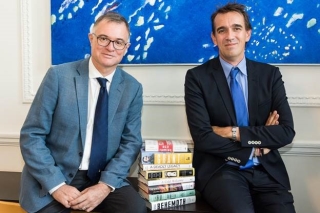 After much anticipation, a shortlist of eight impressive titles was announced this week for the prestigious Cundill History Prize, an international history-writing prize administered by the Faculty of Arts at McGill University. With $75,000 USD awarded to the winner and $10,000 USD to two finalists, the prize evidences McGill’s commitment to supporting leading scholarship produced around the globe. Antonia Maioni, Dean of Arts at McGill, elaborates: “At McGill University, we continue with our ambitious mission for the Cundill History Prize to champion the highest quality historical scholarship produced anywhere in the world. As one of Canada’s most global universities, we are proud to be home to a prize that brings well-researched, well-written history to an ever-growing international readership.”

Established by McGill alumnus F. Peter Cundill, an inveterate traveller with a passion for history, the prize encourages informed public debate through the dissemination of influential history writing to new audiences. With a jury of renowned historians, authors and journalists, the Cundill Prize promises to gather some of the most influential and provocative historical narratives published this year.

As demonstrated by the range of topics in this year’s shortlist selection, this important prize champions well-researched history writing capable of engaging both scholars and the general reader. Author Caroline Fraser has made the list with her 2018 Pulitzer-prize winning book, Prairie Fires, which traces the turbulent life of Laura Ingalls Wilder, author of the popular novel Little House on the Prairie. While Fraser engages with nearly a century of American history through a biographical lens, many titles on the shortlist have developed global historical narratives using a thematic focus. Travelling through England, Eastern Europe, and America, Joshua B. Freeman’s Behemoth: A History of the Factory and the Making of the Modern World examines the impact of the factory on the societies it has touched, as well as its resonance in our collective imaginings. Sam White’s A Cold Welcome charts the first winters of European settlers in three locations across North America, weaving climatological and archaeological evidence as well as written historical record.

Now in its eleventh year, it is fitting that events for the Cundill Prize are growing progressively dispersed: while the shortlist was just announced in London, U.K., the finalist announcement for the prize will be made on October 31st at Massey College in Toronto, Ontario. Directly following the announcement, celebrated historian and Chair of the 2017 Cundill History Prize, Margaret MacMillan, will hold a conversation with Dean Antonia Maioni considering the importance of history in an increasingly global world.

At the height of the Cundill festivities, the prize will return home to Montreal on November 14thwith a lecture from the 2017 Cundill History Prize winner, Professor Daniel Beer. Organized by the Department of History and Classical Studies, Professor Beer will join McGill students, faculty and the public to discuss his award-winning book, The House of the Dead: Colonisation and Punishment in Tsarist Siberia. Following what promises to be an engaging lecture, a Gala announcing the winner of the Cundill History Prize will take place on November 15th at the Montreal Museum of Fine Arts, just steps from McGill’s downtown campus. While the Gala is a private event, it will be preceded by the Cundill Fringe—an exciting people’s choice event featuring a discussion of the finalist titles by a panel of McGill graduate students. The event is free and open to the public and will culminate in the audience voting for the winner just hours before the Gala begins.