On November 19, the McGill Institute for the Study of Canada (MISC) and the McGill Faculty of Law co-hosted the 2020 Mallory Lecture. The guest of honor was The Honorable David Lametti, Minister of Justice & Attorney General of Canada, who spoke on his journey from Chancellor Day Hall to the halls of Parliament Hill. Daniel Beland and Suzanne Fortier provided opening remarks, and Dean of Law Robert Leckey moderated the lecture's Q&A.

Minister Lametti, who graduated from the McGill Faculty of Law in 1988, was also a professor at his alma mater for nearly twenty years. As a McGill Law professor, Minister Lametti established himself as an expert in property and intellectual property law, and was a founding member of the Centre for Intellectual Property Policy. He was first elected to the riding of LaSalle—Émard—Verdun in the 2015 federal election, and he served as a parliamentary secretary until he was sworn in as Minister of Justice & Attorney General in January 2019.

A child of Italian immigrants, Minister Lametti's parents' story is one of generational sacrifice: they came to Canada so their children could have a better life. Calling himself a "child of the Charter", Minister Lametti notes he began his university studies when the Canadian Charter of Human Rights and Freedoms was still in its infancy. He drew great inspiration from it, and noted how it drew upon the values that his parents had instilled in him throughout his childhood.

Minister Lametti describes his role as Minister of Justice & Attorney General of Canada as a "dream job", and shares how his time as a law professor taught him invaluable lessons he uses in his ministerial role, such the importance of knowing when to listen and when to let others speak. Additionally, he shares anecdotes about his political career, and discusses various policy issues that touch upon some of society's key legal questions, including medical assistance in dying (MAID) and systemic racism towards Black, Indigenous, and People of Color in our justice system.

About the Mallory Lecture

The James R. Mallory Lecture series was created in honour of James Mallory, a former professor of political science and one of the founders of Canadian Studies at McGill University. 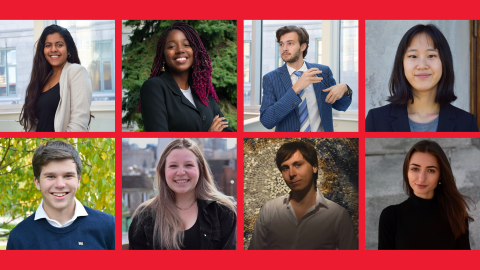