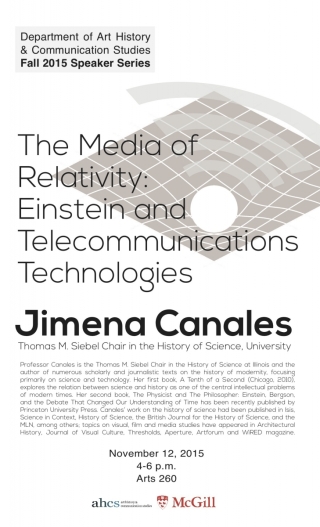 The Media of Relativity: Einstein and Telecommunications Technologies
How are fundamental constants, such as c for the speed of light, related to particular technological environments? Our understanding of the constant c and Einstein’s relativistic cosmology depended on key experiences and lessons learned in connection to new forms of telecommunications, first used by the military and later adapted for commercial purposes. Many of Einstein’s contemporaries understood his theory of relativity by reference to telecommunications, some referring to it as “signal-theory” and “message theory.” Prominent physicists who contributed to it (Hans Reichenbach, Max Born, Paul Langevin, Louis de Broglie, and Léon Brillouin, among others) worked in radio units during WWI. At the time of its development, the old Newtonian mechanics was retrospectively rebranded as based on the belief in a means of “instantaneous signaling at a distance.” Even our thinking about lengths and solid bodies, argued Einstein and his interlocutors, needed to be overhauled in light of a new understanding of signaling possibilities. Pulling a rod from one side will not make the other end move at once, since relativity had shown that “this would be a signal that moves with infinite speed.” Einstein’s universe, where time and space dilated, where the shortest path between two points was often curved and which broke the laws of Euclidean geometry, functioned according to the rules of electromagnetic signal transmission. For some critics, the new understanding of the speed of light as an unsurpassable velocity—a fundamental tenet of Einstein’s theory—was a mere technological effect related to current limitations in communication technologies.

Professor Canales is the Thomas M. Siebel Chair in the History of Science at Illinois and the author of numerous scholarly and journalistic texts on the history of modernity, focusing primarily on science and technology. Her first book, A Tenth of a Second (Chicago, 2010), explores the relation between science and history as one of the central intellectual problems of modern times. Her second book, The Physicist and The Philosopher: Einstein, Bergson, and the Debate That Changed Our Understanding of Time has been recently published by Princeton University Press. Canales' work on the history of science had been published in Isis, Science in Context, History of Science, the British Journal for the History of Science, and the MLN, among others; topics on visual, film and media studies have appeared in Architectural History, Journal of Visual Culture, Thresholds, Aperture, Artforum and WiRED magazine.

Professor Canales is the graduate student speaker choice for 2015, and will conduct a seminar on her work the afternoon before her talk.